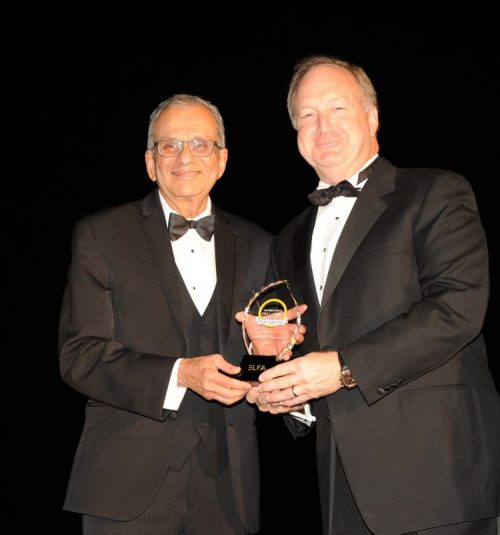 October 24, 2016:   The Equipment Leasing and Finance Association (ELFA) have named Sudhir P. Amembal, Chairman and CEO of Amembal & Halladay (AH), to the Equipment Finance Hall of Fame. The official induction ceremony took place on October 22 at the Chairman’s Dinner, in Palm Desert, California, preceding the ELFA Annual Convention. He is the only inductee for 2016; and, since the inception of the Hall of Fame, is the only non-lessor to be inducted.

“We congratulate Sudhir for being inducted to the Hall of Fame,” said Ralph Petta, President and CEO of ELFA. “As a renowned industry educator, author and consultant, he has contributed immensely to the understanding and growth of the equipment finance and leasing industry in the United States and around the world.”

In his acceptance speech, Sudhir said, “I am, of course, honored to be inducted into the Hall of Fame; and, I am overwhelmed to be the only recipient this year. What Amembal & Halladay has done is well documented; what we have received in return is not. We have had the incredible opportunity to be of service to the global leasing industry; and, the friendships we have forged along the way have been priceless.”

Sudhir began his professional career in lease education, consultancy and publications in 1978 by co-founding Amembal & Halladay, which has trained over 80,000 leasing professionals throughout the world. He has conducted technical presentations on leasing in more than 85 countries.

As a government advisor, Sudhir has served as a leasing consultant to more than 20 governments, reviewing the overall leasing industry in each country and devising strategic recommendations to facilitate the growth of the industry.

Sudhir chaired each annual World Leasing Convention from 1993 until its discontinuance in 2013. He is the co-organizer and chair of the annual China Global Leasing Forum.

He serves on the Advisory Board of OPC Asset Solutions, a prominent asset life cycle management company in India, and as Chief Advisor to CMIG Leasing, one of the most prominent leasing companies in China.

The ELFA Board of Directors established the Equipment Finance Hall of Fame in 2014 to annually recognize individuals who have made unique, significant or lasting contributions to the equipment finance industry throughout their careers.

Following the immense success of Winning With Leasing!, and The Handbook of Equipment Leasing, Amembal and Halladay is proud to announce two new publications, Leasing - The Creative Financing Alternative, ...
END_OF_DOCUMENT_TOKEN_TO_BE_REPLACED

Amembal & Halladay (A&H), the world’s foremost and most highly respected equipment lease training and consultancy firm, announces the strategic addition of Bob Rinaldi to complement and expand the knowledge ...
END_OF_DOCUMENT_TOKEN_TO_BE_REPLACED